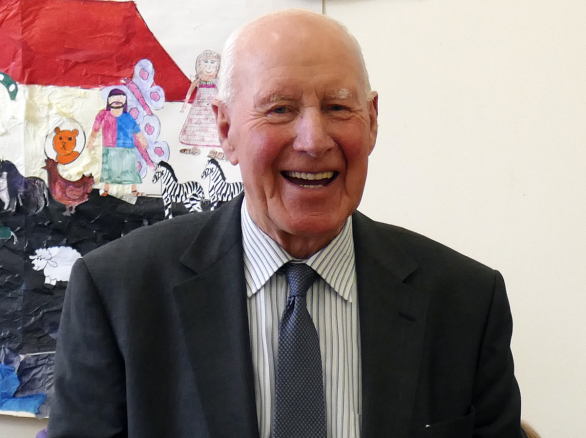 Rev. John Smith has been honoured by Her Majesty The Queen on the occasion of her 90th birthday with the Medal of the Order of the British Empire - BEM. The medal was awarded for services to the community in the Western Isles.

Fellowship with buffet lunch to welcome our visitors from Kenya and to celebrate Rev. Smith's 60th ministry anniversary

After a wonderful morning worship at Clachan church together with Benbecula congregation, our visitors from Kenya and the powerful-voiced choir singers from both parishes... 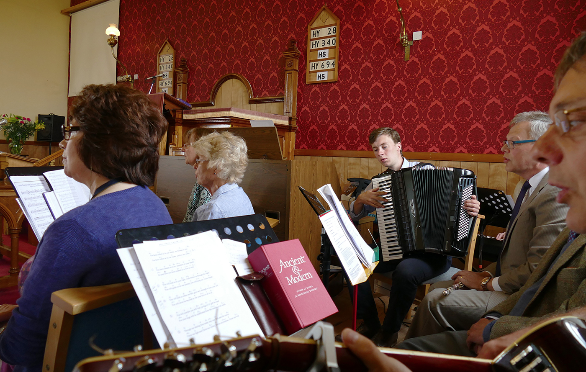 ...everybody was invited to share lunch at the church hall. An incredible variety of delicious snacks and dishes had been prepared by many helpers from both congregations - the buffet really left nothing to be desired! 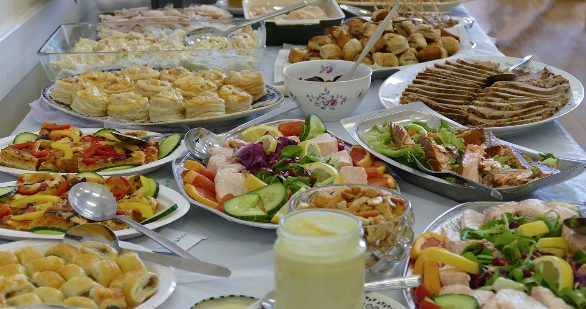 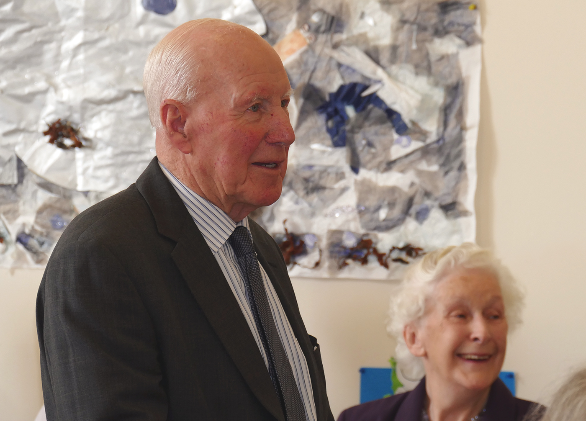 On behalf of all who attended, Alastair Banks congratulated Rev. John Smith on his 60th ministry anniversary and presented him (and his wife Margaret, his loving support for so many years) with a gift... 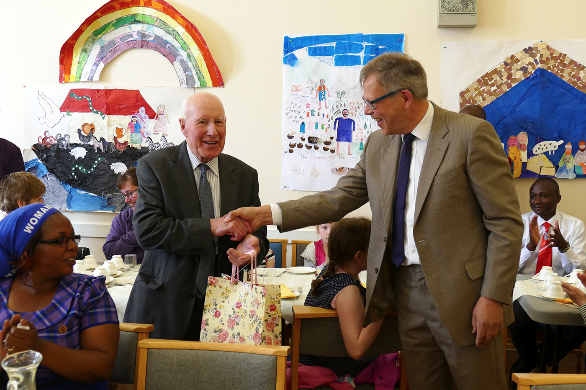 Clachan church was honoured to have the company, at our evening service on Sunday 24th May 2015, of Rt. Rev. Julius Mwamba, Moderator of  the Presbyterian Church of East Africa (PCEA).  He had preached at a joint service of both congregations at Benbecula in the morning. 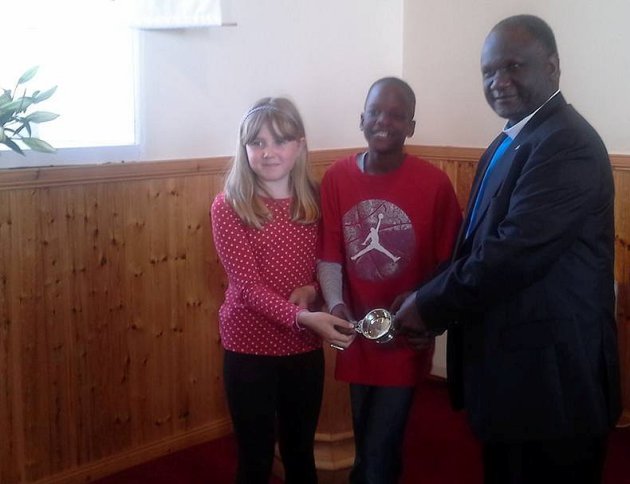 In the morning, Rt. Rev. Julius Mwamba had been presented with a traditional Scottish quaich by Sunday School children of the linked congregations.

He lives in Chuka, Kenya, where we have close links because of the church twinning arrangement, now well established through Benbecula church, for a number of years.

Rev. Mwamba was minister of St. Andrews church Nairobi before his election to Moderator in April 2015.  At the after-church fellowship meeting, he told of the strength of the growing church in Kenya, where they are continually involved in church planting, and church building. The main challenge, though, is gaining funding to train ministers.  There are many who are called to ministry there, but the PCEA can only pay university fees for 10 ministers each year.

He spoke of the deep gratitude which the people of Kenya have for the Scottish missionaries who, at the end of the 19th century, brought the gospel of Christ to Kenya.  They set up Christian churches, but also brought education and healthcare.  Rev. Mwamba asked the congregation here to pray for the issues faced by the Christian communities in Kenya in relation to the global terrorism threats, and for an opening up of overseas opportunities for marketing the rich harvests of fruit, coffee, and tea, in many areas of Kenya, where enterprise initiatives have dried up.

He extended a warm welcome to any from our church who might wish to go and visit Kenya.  This opportunity is available, through the church twinning project, to anyone in the congregations of Benbecula linked with Carinish who feels able to go.  A group of five people from our churches looks forward to meeting with the PCEA Moderator, the churches in St. Andrews Nairobi, and the rural church in Chuka, on a visit this year (8 – 23 July 2015).

More than £1,000 was raised for two worthy causes in a Bring & Buy at Carinish Church, North Uist on Saturday (Jan 24 2015). Organised by church member Cathy Johnson, the Bring & Buy was bustling from the off, with shoppers going on to enjoy coffee and spectacular home baking. 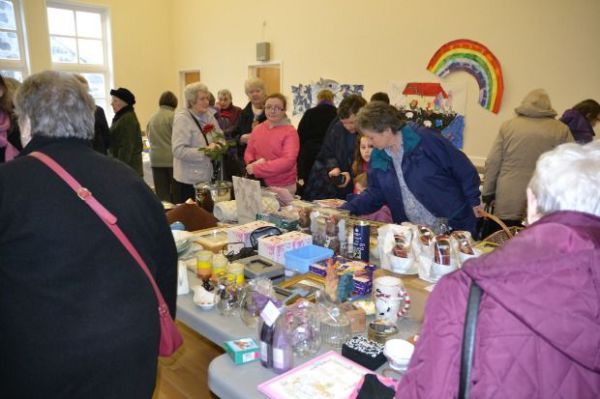 £1,033 was the sum raised, to be split between the Tearfund's No Child Taken anti-child trafficking campaign and Dwelling Places work for Street Children in Uganda.

Cathy told the assembled crowd that 100 children are sold into slavery each hour, and that in some parts of Uganda, one third of 5-17 year olds are living on the streets.

Later Cathy said she was delighted with the success of the afternoon, and expressed her heartfelt thanks to all from the church and wider community who supported the event by helping with the organisation, and by donating, baking and buying.

Visit by the Moderator 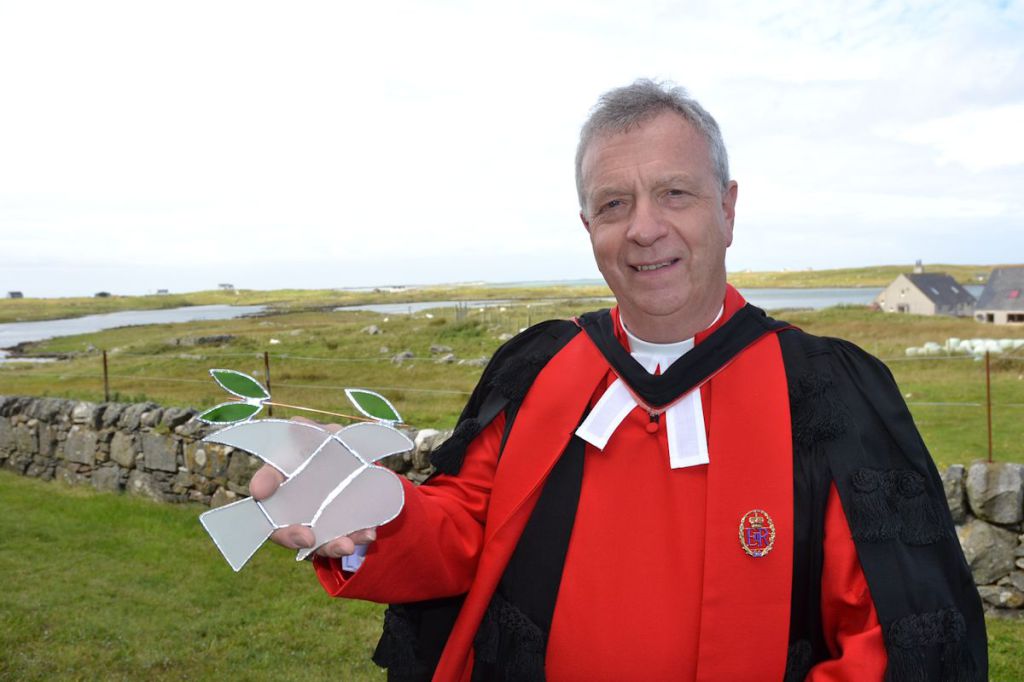 In August 2014, our church was honoured to host a joint worship service at which the then Moderator of the General Assembly of the Church of Scotland, the Rt. Rev. John Chalmers, gave out Long Service Certificates to elders and Sunday School leaders from all the North Uist and Benbecula churches. 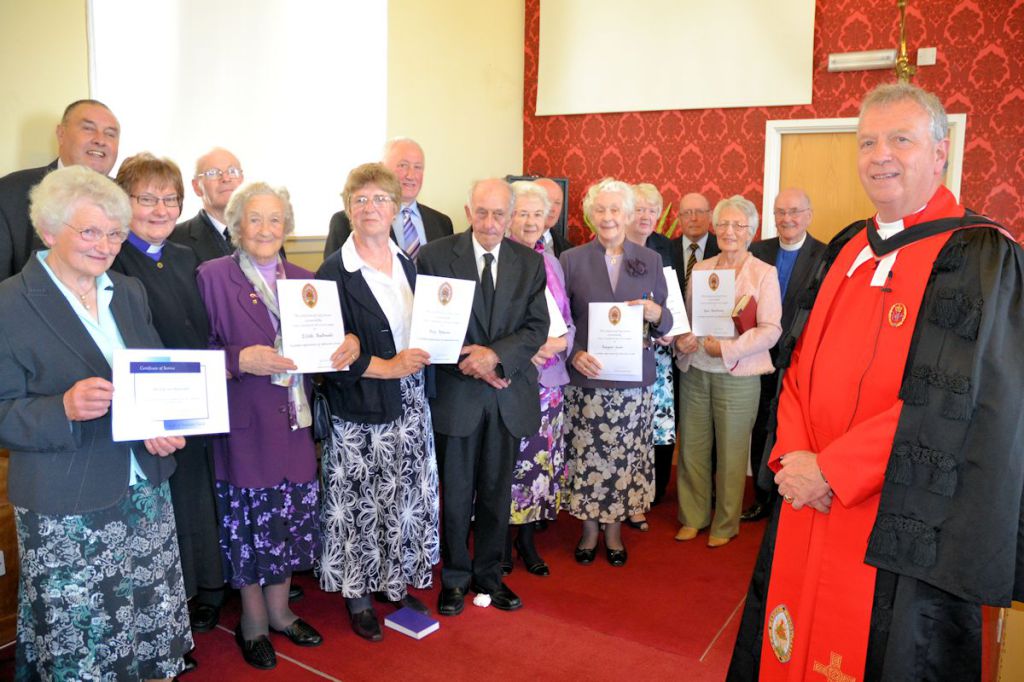 If you have any queries or wish to make an appointment, please contact us: